Let’s be honest, I’m mostly happy it’s President’s Day because I don’t have to work. But I’m also happy because I found this kick ass list on the internet listing every medical condition that each president of the United States had!

It’s a treasure trove of info.

Key learnings: lots of anxiety and depression amongst our former presidents, along with quite a few cases of constipation and hemorrhoids.

Did you know that President Polk was classified as sterile?  It puts things in perspective to think that Polk and his wife Sarah were probably being told to “just relax” too when it came to kids. It’s hard to say if the infertility issues they had stemmed from her or him (he had an operation for a urinary stone when he was 17 which may have left him sterile, but there were no medical tests back then to conclude anything.)

I found a pic of them taken at the 27th baby shower they attended as a couple:

Yesterday was an extremely productive day, which makes me happy since I fluctuate between extreme laziness to hyper productivity at any given moment.  Hubs has been very busy finishing his dissertation, so I was left to roam the streets of LA wild and free. In my single days, this would have involved tequila shots, but yesterday this meant I paid two visits to the Land of the Fertile (and came out unscathed!) I then bought and built our generic looking Besta Vassbo cabinet (which we’re using for laundry supplies) and it (surprisingly) kicks ass!! I only said 32 expletives while building it. I broke one screw trying to tighten something which caused a HUGE expletive because I thought I had to go back to the Land of the Fertile and get another replacement part. Three times at IKEA in one weekend would have been too much for me to handle. Fortunately, I was able to salvage things.

I wish I had a before picture when all of our laundry supplies were hanging out on the floor and clothes were everywhere, but here is the “after”!

Where’s all of our messy detergent and dirty laundry? 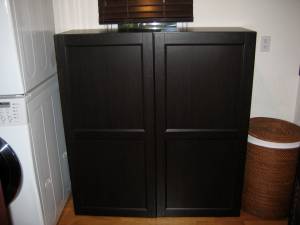 To top that off, my carb cravings have become too insane to handle due to this gluten free crap, so I took matters into my own hands and learned how to make gluten free bread.

Did I mention it actually tastes good, and looks like sliced bread? 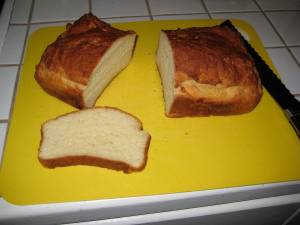 Now I can relax today with some gluten free toast, sip a morning coffee, and do some Paint by Number later on. All in all, it’s been a great weekend. Happy President’s Day!

I'm a happily married, 31 year old gal who is just starting her journey to conceive. I also have ovaries that may need a jump start. This blog is an attempt to channel my obsessive research on my Polycystic Ovarian Syndrome into something positive....like a pregnancy test. That would be awesome. I also hope that other women with this condition will find support in this blog. There are a lot of us out here! Happy reading, whatever your journey may be.
View all posts by Sunny »
← Sunday Fun Day
Welcome to my first ICLW! →